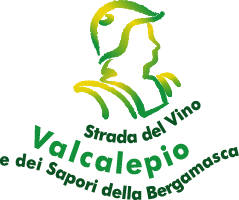 The Province of Bergamo boasts a full spectrum of quality wine production, capable of winning over wine-lovers from the entire world.

Among the wine offering is:

This is a passito, or raisin, red wine obtained from 100% Moscato di Scanzo grapes, produced and vinified entirely in the Municipality of Scanzorosciate.

Moscato di Scanzo is an indigenous grape variety that was rediscovered in the 1980s.

Moscato di Scanzo DOCG is obtained by a procedure that envisages harvesting from the end of September to the middle of October, and the drying of the grapes for a minimum of 21 days.

The drying process involves laying the grapes on special racks or in special boxes in ventilated and temperature controlled rooms.

The production specification requires the wine to be aged for a minimum of 2 years.

The wine has a fairly intense ruby red colour, which tends to cherry red with garnet reflections. It has a delicate yet intense, persistent and characteristic aroma. On the palate it is sweet, pleasant and harmonious, with a light almond aftertaste and pronounced aroma, and hints of dried rose, clary sage, acacia honey, red fruits, and, in some cases, spicy notes of pepper and cinnamon.

This is the new Bergamasca DOC wine, recognized by Italian Ministerial Decree in May 2011. The first harvest was, indeed, in 2011, and has led to a real renaissance in various native vines that have been cultivated for centuries in the Bergamo area.

The wine has a straw yellow colour and an intense aroma, with clear hints of fruit reflecting its vines of origin.

On the palate, it is dry and decisive, giving way to a full and harmonious final sensation.

It is best served at a temperature of around 10°C.

The undisputed star of the Controlled Designation of Origin, recognized in 1976, is Valcalepio Rosso DOC, a blend of Merlot and Cabernet Sauvignon grapes vinified separately due to different grape ripening times.

At the beginning of spring, the wine is carefully combined in the proportion indicated by the specification, with 40-75% Merlot and 25-60% Cabernet.

It is then left to age in a barrel for a few months before its release for consumption from the 1st of November of the year following the harvest.

Valcalepio Rosso DOC has a ruby red colour tending towards garnet, an intense aroma with a clear note of black cherry. It offers the palate a dry, soft flavour, with a full and satisfying final sensation of harmony.

It pairs perfectly with red and white meat dishes, roasts, game and cheeses.

It is best served at a temperature of about 18°C, in its own special Valcalepio wine glass.

The Bergamo territory’s fitness for the production of fine red wines has made it possible, for certain lots endowed with the right characteristics of maturity and structure, after a 3-year ageing process, to be worthy of the term “Riserva”, or “Reserve”.

The Riserva has all the qualities of Valcalepio Rosso DOC, but with greater structure and a superior personality.

The richness of its sweet tannins, due to its extensive wood ageing, makes it an imposing yet pleasantly drinkable wine that can be delightfully paired with consistent meat dishes and flavoursome cheeses.

Once again, the wine’s most impassioned goal and accomplishment is harmony.

This is a passito, or raisin, red wine obtained from 100% Moscato di Scanzo grapes, produced and vinified outside of the confines of the Municipality of Scanzorosciate.

Moscato di Scanzo is an indigenous grape variety that had become legendary due to its rarity until its revival in the 1980s.

Valcalepio Moscato Passito DOC is obtained by a procedure that envisages harvesting during the first few days of October, and the drying of bunches for at least 21 days.

Only after this time can the winemaking begin with an initial fermentation phase on the skins and a secondary phase exclusively with the must.

Following the slow fermentation process and subsequent refinement, the wine can be sold from the arrival of spring in the second year following the harvest.

The wine has a ruby red colour and an intense aroma with hints of dried rose, clary sage, acacia honey, red fruits, and, in some cases, spicy notes of pepper and cinnamon.

It is generally enjoyed at the end of a meal, and brings out the very best in dry pastries, but it is also well worth trying in combination with different cheeses, particularly blue varieties. It is best served at 15°C.

Wine production in the Bergamo area does not stop at Denominazione di Origine Controllata (DOC), or Controlled Designation of Origin (PDO), wines, but is complemented by a comprehensive range of wines with the Indicazione Geografica Tipica (IGT), or Typical Geographical Indication (TGI), classification. These wines express a strong bond with the territory through the use of traditional vines and vinification processes to enhance the sublime pleasure of drinking wine.
It is in this context that winegrowers feel freer to experiment and express their own personalities and ambitions to the absolute maximum.

As for dairy and cheese production with the Protected Designation of Origin (PDO, or DOP in Italian) in the Province of Bergamo, there is Formai de Mut, from the Upper Brembana Valley, Taleggio, Bitto, Gorgonzola, Grana Padano, Quartirolo Lombardo, Salva Cremasco, Provolone Valpadana, and Strachitunt.